When we plan a trip to Myanmar, Bagan is always a must visit place in our list. Well, no one would like to miss magnificent temples and breathtaking sunset moments. But there is one more place people forget to go a visit while they are in Myanmar, which is “Mandalay”.

Unlike Yangon, Mandalay has a more laidback vibe. It is more like an ancient Bagan city. Mandalay is a home to numerous Buddhist temples, pagodas and had a lot of history, culture, seemingly more than Yangon. Here are the reasons why you should not miss to visit Mandalay when you are in Myanmar. First, there is Mandalay Palace that exists in the middle of the town. It is constructed in mid 1800s and the last royal palace of the Burmese monarchy. The original palace was destroyed, looted and re-built in 1989. There are plenty of buildings surrounded by four 2-kilometer walls, moat and a watch tower to climb for a better view.

Shwenandaw Monastery was once part of the original royal palace, and the only part that survived during war. It is known for it’s teak carvings that tell the Buddhist myths and legends. It is one beautiful monastery that you should not miss for sure. 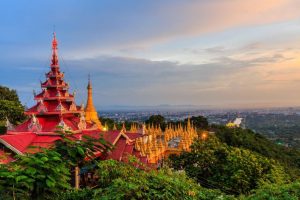 Next place you should visit is Mandalay Hill which is 240 meters high and full of pagodas and monasteries. It is one of an important pilgrimage sites for Burmese. Aside from that, the Kuthodaw Pagoda is another must visit place. The pagoda can be found at the foot of Mandalay Hill and surrounded by more than 729 stupas. The entire Buddhist bible was engraved on 729 white marble stones which are set up in the square form keeping the 730th pagoda at the center. Each marble tablets are about 3 feet wide and 4 feet high. It is the largest book in the world and a sight that needs to be seen.

Don’t forget to visit the largest teak bridge in the world, the U-Bein Bridge as well. It spans 1.2km over the Taungthaman Lake. It is one of the most popular attractions. The best time to visit is for sunrise or for sunset. I would suggest to get off the bridge at the halfway point onto the grassy area and include the bridge in your photo with sunset background.

Another reason is that it is cheap. There are budget-friendly hostels and guest houses scattered around the city. Foods are also decent and you can try Myanmar food in many restaurants.

I also would like to suggest Hotel Hazel Mandalay where I stayed while I was in Mandalay. Hotel Hazel is 4 Star hotels in mandalay rate and the modern hotel with Mandalay city view. It is good to rest at ease after the long trip. Waking up and enjoying the Mandalay city view is one of good memories. There are also spacious rooms with the Mandalay Hill and the Shan Plateau’s view. Although that might not be very friendly budget, but it is worthwhile for your stay. 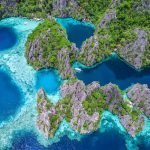 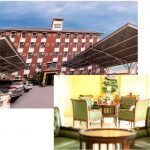